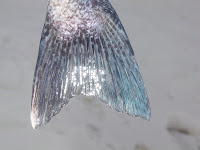 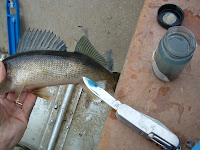 Blue walleye of Canada are genetically different than the extinct "blue pike" of Lake Erie. They are albino for yellow color and have blue color in the mucous of their skin. The blue color forms on the dorsal (upper) part of the body and is particulary noticable in the two dorsal fins and the upper part of the tail.

2. We have identified the blue pigment in the mucous as a new protein never before described in the literature. We have named the pigment "Sandercyanin". Sander is the genus name for walleye and cyanin means blue in Greek.

3. Sandercyanin consists of a large lipocalin protein which carries "biliverdin". Biliverdin is a normal excretory product secreted in urine of all vertebrate animals. It forms from the breakdown of "heme", a blood protein.

4. Sandercyanin occurs in the mucous of walleye in many lake and river systems in Ontario, Quebec and Manitoba. It is equally present in both blue and yellow walleye in any given lake or river system.

5. Sandercyanin appears to be moving south across the Canadian-U.S. boarder into upper Minnesota and upper Michigan.

6. Sandercyanin does not harm the health or taste of the fish.

8. One factor that causes the breakdown of heme to biliverdin is exposure to ultraviolet (UV) radiation from the sun. The earth is normally protected from UV radiation by ozone in the upper atmosphere. In recent years ozone "holes" have been noted over both the north and south poles as a result of CFCs (chlorofluorocarbons) entering the atmosphere. In some species of animals, biliverdin is known to act as a photo-protectant.

9. It is possible that walleye in Canada use, as a sun screen, the very chemical which forms in their blood from exposure to too much sun. This conclusion is still only speculation but it is our best hypothesis.
Posted by Wayne Schaefer at 3/04/2008 08:31:00 PM 11 comments: